Posts: 6
Karma: 2
Less More
Thank you received: 6
Topic Author
FIVE YEARS of Fighting 99th! #9550
Lady (thank you Beanie) and gentlemen, here we are; 5 years down for the F99th count. I have a few reminders set in my calendar that go off roughly a month ahead of each F99th-aversary, and they always make me reflect on how far this group has come. When we started this group, I knew we had a really, really strong foundation in the people who started it, much stronger than any online group I had participated in before. And I knew the principles we shared and structured the group around would serve to sustain the group and keep it strong well into the future. Today, looking back at 5 years’ worth of F99th history, I’m still kind of blown away by how well we’ve stood the test of time. As dedicated as our members are and as well-built as the organization is, 5 years have seen all sorts of challenges and changes for me personally as I’m sure it has all of you; 5 years is no small amount of time. It’s astounding to think through all of it F99th was there and persisted to be as strong as ever today. I think we should all be very proud of that and I thank you all for making it happen.

And with another year in the books, it’s time to recognize our best and brightest of it. For those of you who haven’t been around for each of our 5 Pilots of the Year (or the 2 prior to that, in the pre-F99th days), the Pilot of the Year is someone who has distinguished themselves and gone above and beyond for their teammates. That can take any form, be it simple kickass flying in DCS, kickass comradery in TS or any of the ancillary parts of DCS, or kickass mission/website/community building, anyone who has clearly gone above and beyond to make the F99th experience a better one will be in the running for Pilot of the Year and will be recognized whether or not they actually take the crown. Some years we’ve opened it up to a vote by all members, but others when the administration sees a clearly deserving candidate we’ll go ahead and vote amongst ourselves.

This year, the administration is obliged to give it to our fellow admin: Kocrachon. 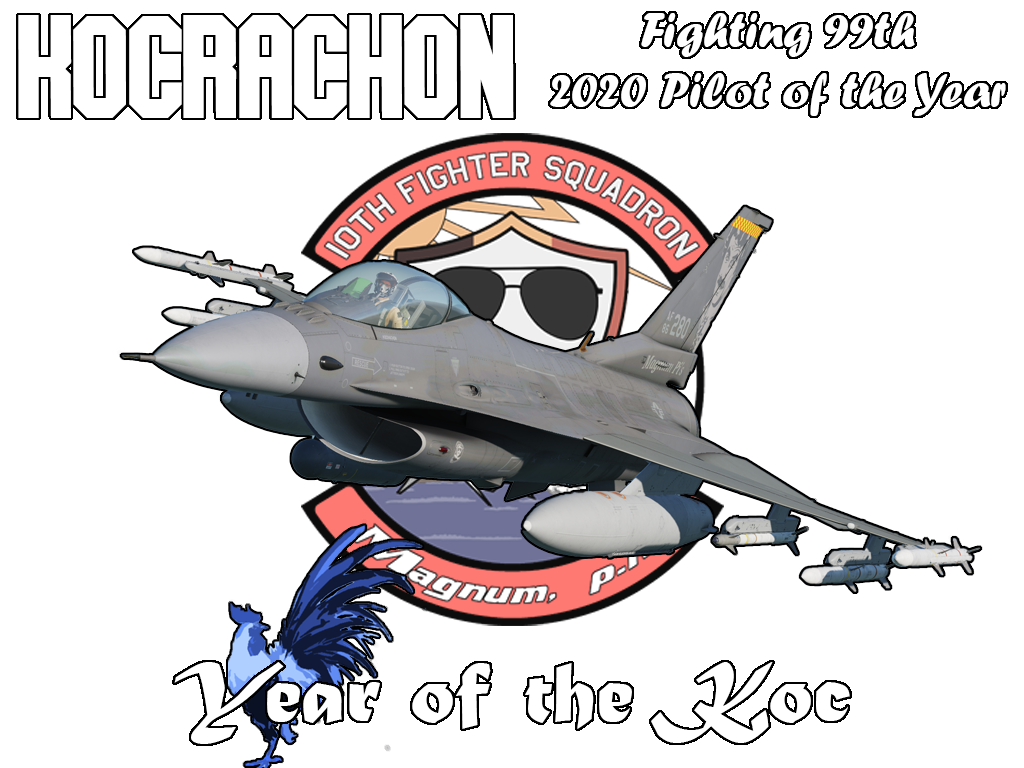 Now some might look at the admins giving POTY to an admin with some skepticism, Kocrachon surely did, but anyone who’s been around to participate in our community this last year knows why we had to do it. If it wasn't so well-deserved we probably would have refrained from doing so. Now we all knew Kocrachon was a special guy, after all he made it into the administration with his good works and not-always-terrible attitude more than 2 years ago, but he really stepped it up this last year. Among those many things were his building and hosting of server 2 after he switched jobs and had to lose the AWS instance he had provided previously. He put together almost all of the new missions we hosted over the last year, and of course he’s been around and flying with everyone on a near-daily basis. I doubt anyone would disagree that that’s a pretty unbeatable POTY resume. And I appreciate the fact that he’s been this dedicated now as opposed to any other time before; he is one of the people who have been with us from the beginning and it shows that as time goes on, he is more involved and more dedicated rather than less. It makes me hopeful for the future of F99th to know that we have people whose appreciation and support for the group is always growing. Despite how obnoxious he is, Kocrachon is a pretty stellar example of that. Plus I really wanted an excuse to say 2020 was “the year of the Koc” and put that on our Teamspeak banner, the other admins will attest to that.

Like every year, there are more people we want to mention than just the Pilot of the Year; if there was only one person who deserved a shoutout every year I doubt we would have made it to 5 years at all.. Again, we want to acknowledge and thank Misi for being the DCS guy we all wish we were. He’s just friggen cool, he has no equal in the DCS community for how much positivity he brings to the atmosphere, and for whatever reason we’re the group he chooses to hang out with. I hope that means we as a group are as cool as he is as an individual. His Twitch stream is a constant source of good F99th rep in the larger community and he flies our flag in community events all the time. Kippis!

Benny is a relatively new addition, having joined almost a year ago, and in that time he’s done some awesome things with aircraft liveries. He’s also a great guy to fly with. He made the 10th FS Magnum P.I.s skin for Kocrachon as well as a bunch of F-16 and F/A-18 skins from real life examples and they’re all top, top notch. Anyone who contributes a good Have Glass V livery in the community is a great asset in my book. Thanks Benny!

And lastly, thank you to everyone. All of our members and our regular guests make F99th what it is, so I just want to express my appreciation for always giving me the best place to fly in the entire DCS multiplayer community. I can only imagine where another 5 years will take us and what we’ll be flying then. Cheers!