NATO Forces are attempting to deny Russian forces access to the black sea. NATO must take all the remaining airfields and clear the towns west of Cherkessk of all Russian ground forces.

IRON HAND: Wild Weasel tactics and techniques began their development in 1965 following the commencement of Operation Rolling Thunder during the Vietnam War, and were later adapted by other nations during following conflicts, as well as being integrated into the Suppression of Enemy Air Defenses (SEAD), a plan used by U.S. air forces to establish immediate air supremacy prior to possible full-scale conflict. Initially known by the operational code "Iron Hand" when first authorized on 12 August 1965, the term "Wild Weasel" derives from Project Wild Weasel, the USAF development program for a dedicated SAM-detection and suppression aircraft. The technique was also called an "Iron Hand" mission, though technically this term referred only to the suppression attack before the main strike. Originally named "Project Ferret", denoting a predatory animal that goes into its prey's den to kill it (hence: "to ferret out"), the name was changed to differentiate it from the code-name "Ferret" that had been used during World War II for radar counter-measures bombers.

NATO Forces control the Black Sea, the airfields west of Maykop, and the airfields around Tbilisi. Attack each Russian controlled airfield. Capture Bases by moving your ground forces on to the base. Aircraft at that location will become available for use.

In addition to the airfields, Russian forces are amassing ground forces which intel believes will push west to take our western bases. 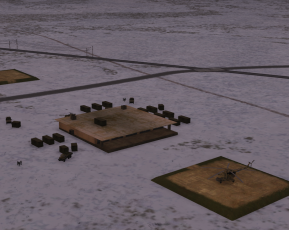 Locate and destroy enemy warehouses which are continually sending reinforcements to the AO. You may also capture these facilities and use the resources for your team! NOTE: You can spot the warehouses by the surrounding supply crates & equipment. See briefing images 2 and 3.

It is vital that we keep at least 1 warehouse in NATO control. Loosing all our warehouses will cost us the mission and we will lose our foothold in the area.

The city of Zugdidi is a hotbed of enemy logistical activity. From this city ground forces are produced and routed to Sochi, Gudauta and Sukhumi. Destroy any bridges along their path.

HELO's squadrons may build the following number of reinforcements. If this limit is reached, you won't be able to unpack any crates in this category (also consider existing units):

TANKERS: You must take Sochi, Gudauta and Sukhumi. Once taken a C130 will fly the tanker pilots to Sochi from Krasnodar. Protect this aircraft! No pilots! No Tankers!
Texaco TEX 41 X 252
Shell SHL 42 X 253

Our Primary Goal is to prevent NATO forces from taking our Air Bases. To push NATO out of the region we need to take the battle to them.

Like all armies, NATO relies on keeping their supply lines moving. Interrupt access to vital supplies and the gears of war come to a halt.

Search for and Destroy the NATO Controlled warehouses which can be identified by the supply crates surrounding the buildings. These are the lynch pin to the NATO advancement. No supplies, nothing to advance with! ach of our airbases starts with a warehouse, but it can be captured by NATO - if this happens, destroy the warehouse!

Destroy all other warehouses on site! See images 2 and 3 in the briefing.